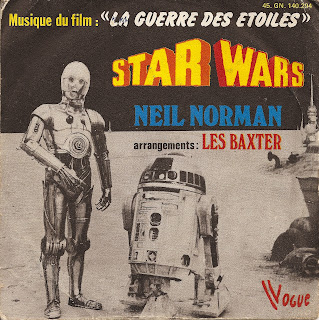 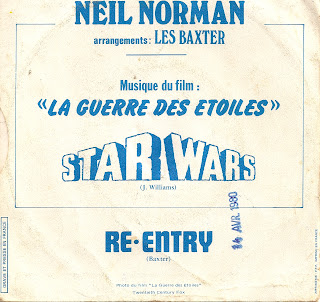 Neil Norman and easy listening master Les Baxter produced several records under the name of Greatest Science Fiction Hits at the end of the 70's and the begining of the 80's. Thoses records were melting sci-fi soundtracks covers and original material, all made in a disco synth pop style. Star Wars was released on Greatest Science Fiction Hits Vol. 1 LP and as a 7" in France with on the B side Re-Entry. Re-Entry is the strongest track a little groovy gem. Starting with a traditional sci-fi synth sound, it then explodes in a blaxploitation style track with funky breaks, a massive bassline, a wah wah guitar and then morphs again into jazz rock. Warning: the sound on the version I got and I have posted is not very good. 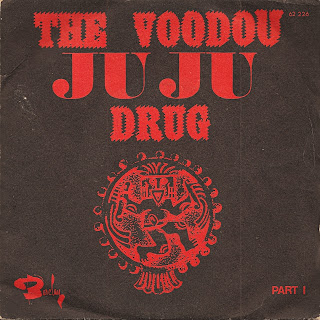 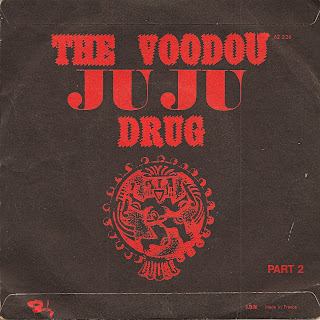 I just found this gem in a Easy Cash shop near my place for 50 cents. I didn't have a clue how was this record when I digged it. I just found the title pretty cool: The Voodou Juju Drug. Back home I googled the name and realised that this 7" had already been posted on a very good blog (http://dj-alfonso.blogspot.com/) and was worth around 50 euros !!!! The first side, called The Voodou Juju Drug is a freaky breakbeat number with a nice sitar sound. Side 2, Killersteen's Voodou Juju is nice slice of pop afrobeat. According to DJ Alfonso, this record can be credited to library music composer Janko Nilovic. 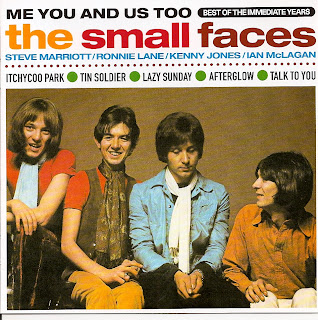 Created in 1965 and signed to Decca, The Small Faces were at first just another Mods bands among other ones. In 1967, Andrew Loog Oldham, The Rolling Stones manager, created his own label, Immediate, and signed The Small Faces after the band got into several arguments with its label and its management. The band, led by Steve Marriott and Ronnie Lane, found in Immediate a place to express its creativity and signed its best songs, churning out hits after hits. If they were clearly influenced by the psychedelic air of the time, they are the best when they stay closed to what made their strength: raw pop clearly influenced by deep soul. In that sense, the last two instrumentals of this compilation, The War Of The Worlds and Wide Eyed Girl On The Wall are outstanding work.
The Small Faces were not an album band but a 7" band so this best of is the best way to discover and appreciate their music.

Download => The Small Faces - Me You And Us - Best Of The Immediate Years
Publié par Zorba le Break Aucun commentaire: 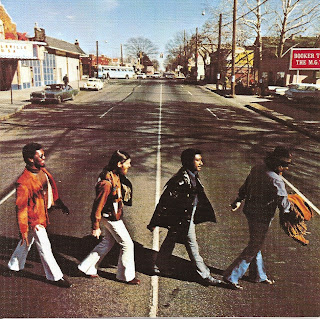 Booker T liked so much The Beatles Abbey Road album that he decided to cover it entirely in Memphis with his M.G.'s pals (Steve Cropper, Donald "Duck" Dunn and Al Jackson), giving to the resulting album the name of the street were Stax studios were, McLemore Avenue. Of course, those guys were so talented that they completely appropriated the Fab Four songs to make them their own, mixing them in a 3 instrumental funky as hell medleys and a single track, Something. Only a tight band like Booker T. & The M.G.'s could mix Golden Slumbers, Carry That Weight, Here Comes The Sun and Come Together in a single song without sounding strange. The other medleys gathers Because/You Never Give Me Your Money and Sun King/Mean Mr. Mustard/Polythene Pam/She Came In Through The Bathroom Window/I Want You (She's So Heavy) with the same success. It's deep funk going pop with major success. Even the record cover is a cool pastiche of the Abbey Road original cover. 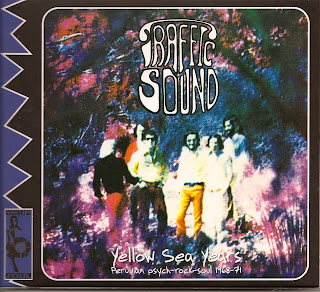 When you think about Peru, you don't necessarily associate that country musical scene with psychedelic rock. But there is no reason that can explain that this small country would have not been touched by the 70's psychedelic wave. Traffic Sound was at first a covers band created in 1968 by Manuel Sanguinetti (vocals), Freddy Rizo-Patrón (rhythm guitar), Jean Pierre Magnet (sax), Willy "Wilito" Barclay (lead guitar), Willy Thorne (bass) and Luis "Lucho" Nevares (drums). They recorded their first album, A Bailar Go Go, in 1968. They then recorded three more albums but this time with original material: Virgin in 1969, Traffic Sound in 1971 and Lux in 1971. Traffic Sound music easily suffer comparison with its American or European counterparts of the times. They are not an exotic fade but a  strong band with tight songs shaped for worlwide acceptance and success. Even if they used English in their songs, their latin roots can be heard all over their music but in a subtle way especially in the percussion work or the use of the Afro fused saxophone. There isn't any real psychedelic band without their drug hymn. For Traffic Sound, it's the infamous Meskhalina, released in 1969. Making the music of this band available was necessary and we can thank Vampisoul to have selected the best tracks of their albums for this wonderful compilation.