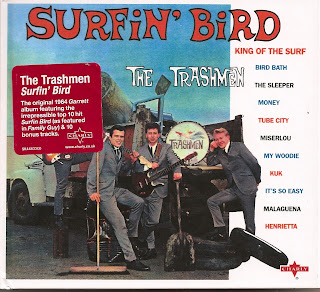 If you want to learn everything about The Trashmen, just hit the internet or read the nice line note of this excellent Charly 2011 reedition. Surfin' Bird has acquired a cult status amon punk and garage collectors and when you hear their raw take on rock'n'roll, you easily understand why. Surfin' Bird, their only hit single, is a combination of two R&B hits by The Rivingtons, Papa-Oom-Mow-Mow and The Bird's the Word and probably the first single to chart with a sick punk voice on it. The Trashmen gained a new popularity in the mid 90's when Quentin Tarentino made of Misirlou the opening theme of Pulp Fiction. 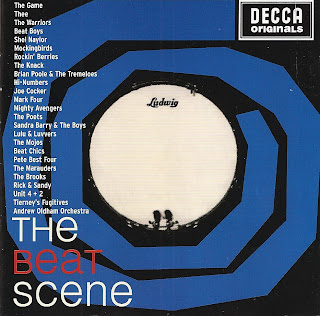 Decca released a serie of 8 compilations at the end of the 90's, gathering their 45 rpm released in the 60's in the wake of The Beatles early success. Decca A&Rs were looking for the next Beatles, a band they declined to sign,  and the label started to churn out 7" made by bands with a name starting with "the". Most were just one hit wonders, giving up everything they had on two sides and then vanishing into showbiz obscurity, even if people like Joe Cocker, The Knack or Andrew Oldam had a nice career afterwards.  It's  good old fashioned rock'n'roll with a nice poppy garage british swag.

Pachuco-Soul! - A Collection Of Vintage East-L.A. Grooves From The Vaults Of Rampart Records (Vampisoul - 2004) 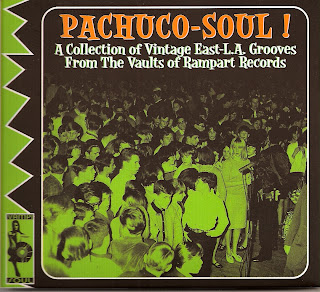 Fourth post in a row on a label compilation. This time, it's the Eastside sound of Rampart Records. Eastside goes for the Eastside part of Los Angeles and its Mexican American community and musicians. The entire Eastside scene success was due largely to one man, Eddie Davis, that produced and pushed hundreds of records from 1958 to the early nineties. His biggest selling record was Land Of 1000 Dances by Cannibal And the Headhunters, the kind of garage anthemic sound the Eastside bands were famous for. They followed all the musical trends, from rock'n'roll, doo-wop, funk, soul and even disco, spicing it up from times to times with traditional Mexican instrumentation like a mariachi trumpet on The Majestics' (I Love Her So Much) It Hurts Me, the Santana sound alike latin rock of Tocayo (Con Safos) or on Mickey & The Mex-Tex's Borracho. The Frog by The Village Callers is the real curiosity on Pachuco-Soul! because it saw this latin soul band venturing into bossa territories. Another massive song is Skylite's Boogie Butt and its infectious bassline. Break diggers will go directly to One G Plus Three's Poquito Soul. You won't find only songs released on Rampart Records here but others as well released on labels like Faro Records, Linda Records or Valhalla Records. The legacy of the Eastside sound is still well alive today inside the Mexican American community, especially thanks to the lowriders fans who made of doo-wop and sweet soul their official soundtrack (cf. the excellent article on this scene published in the number 49 of Waxpoetics). 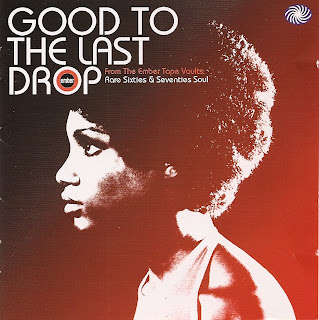 Ember Records was founded in London by Jeffrey S. Kruger. He enlisted a journalist, John Abbey, to seek out soul nuggets in America to give them a proper UK release. With a discerning licensing policy and the subsequently constant quality of his soul 45" releases, Ember Records became a major force in British music industry. Most of the artists Ember licensed never really made it, except maybe The Jones Girls or Johnny Otis, but all need to be absolutely rediscovered, from the psyche soul of Milt Matthews Inc to the gospel of Mary Frazier Jones. Adidas paid Pilooski to make an edit of Why Can't There Be Love by Dee Edwards for a commercial a few years ago and the original is also featured on this compilation. Good To The Last Drop (the name of a Johnny Otis song) gives is a good occasion to have a large overlook (23 tracks) on this rich and excellent catalogue. Most of the songs featured had never been released before on CD and have never been released again since so, Northern Soul and Mods heads just enjoy. 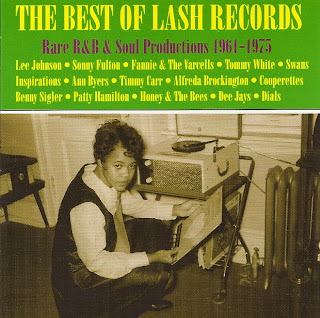 After the Ref-O-Ree label from Nasville, let's focus on Lash Records from Philadelphia. Created by brothers Al and Howard Ravitsky and a friend, Gil Lipschitz. It really amazes me to see those three jewish guys create a record label dedicated to underground doo-wop, R&B and soul, cuting sessions after sessions 7" in search of a national success that never came. But it's not the fault of the music, authentic, raw and good as I like it. It's not a surprise that Lash Records was popular among Northern Soul heads, his late 60's and early 70's recordings by the likes of Timmy Carr, Benny Sigler, Alfreda Brockington or Patty Hamilton being incredibly funky. A welcome discovery that allows you to possess nearly  all Lash releases (30 tracks) for a very decent price. 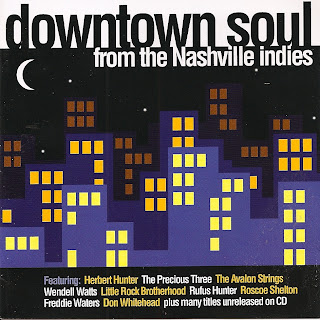 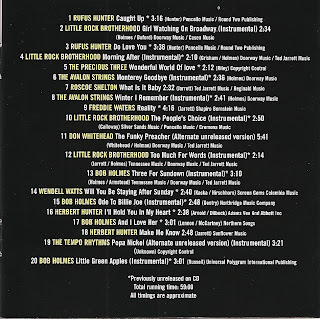 Under this ugly cover you'll find an interesting compilation of deep and jazzy soul sides recorded for Nashville label Ref-O-Ree (with the exception of two tracks produced for Spar) between 1968 and the mid-70's, when the label went out of business. Ref-O-Ree was created by Ted Jarrett in 1968. All the singers from Nasville soul scene came by his studio to quickly record incandescent soul tracks and when no singers was avalaible, instrumentals were cut. Some were later used as backing tracks for proper singers. I had never heard of Rufus Hunter, The Precious Three, The Avalon Strings or Bob Holmes before buying this compilation but they were all extremely talented. The only downside of this compilation is the complete lack of informations on all those artists in the liner notes. 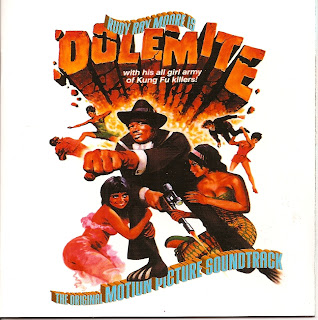 Rudy Ray Moore was a succesful comedian when he jumped in the Blaxploitation wagon, shooting allegedly one of the baddest (and consequently seminal) movie ever made, Dolemite. Dolemite was already a successful character he used on his comedy routines he just morphed into a badass muthafucka that fight the Man and clean up the ghetto. For the soundtracks, Rudy Ray Moore hired session musicians whom he collectively titled The Soul Rebellion Orchestra. Ben Taylor and Mary Love provided the signing parts while Rudy Ray Moore can be heard toasting on Flatland. The overall result is a raw funky and soulful ride with one of Blaxploitation most enjoyfull soundtrack. I just regret that the sound on this 2006 Relapse reissue is below average. But it allows to find, with the complete Dolemite soundtrack, the Human Tornado soundtrack as well and radio spots made to advertise both movies. A must-have with plenty to sample. Some fellow blogger have already posted this album.