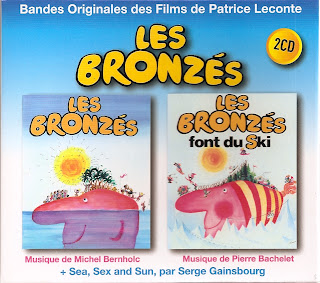 This double CD holds the soundtrack to two of the most popular French comedies of the 70's. Every French people you will meet anywhere in the world knows by heart the text of those two really funny films. Making fun of French people in vacations (in Africa in the first movie and in the Alps in the second ones), spectators found they represented them very well and the characters featured are now part of French popular culture. The music of Les Bronzés was composed by Michel Bernholc and is  mixing exotica, folk, disco funk and melancolic electronica. The theme music, Sea, Sex And Sun was allegedly composed in five minutes by French master Serge Gaisnbourg himself. Pierre Bachelet was trying to make a living with erotic soundtracks (Emmanuelle, Histoire D'O) when he was called to make the music of the second adventures of Les Bronzés, Les Bronzés Font Du Ski. You will go for track number 5, a nice little piece of electronic funk clearly inspired by Moroder.