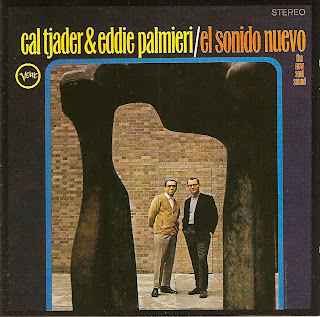 When two masters of latin jazz decide to make music together, the result of their collaboration can only be a great album. Both were featured in the 49th issue of Waxpoetics and Duncan Reid described how both artists met: "In 1965, during a trip to New York City, Cal Tjader took in a concert by Eddie Palmieri (...). After the show, Tjader approached Palmieri and suggested they recorded together". El Sonido Nuevo was their first LP. It was then followed by Bamboléate. Palmieri took the arrangement duties and Rudy Van Gelder was behind the boards as engineer. El Sonido Nuevo is a latin scorcher as good as any record with the logo Fania on it. I ripped the CD reedition which holds the four titles of the original album  and 6 bonus tracks issued from two other Cal Tjader albums, Breeze From The East and Along Comes Cal but which do not feature Eddie Palimieri.