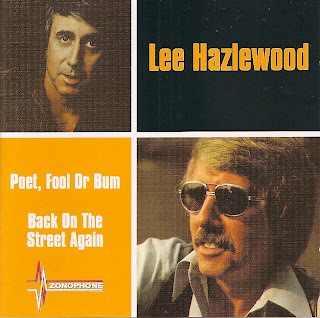 Poet, Fool Or Bum and Back On The Street Again are certainly not Lee Hazlewood most revered albums. Poet, Fool Or Bum was greeted by a one word review by the NME ("bum") while Back On The Street Again, recorded in FM hard rock band Scorpions studios in Germany for radio programmer Bobby Bobcine, was just ignored. The album only came out in Sweden, Holland and Germany. Poet, Fool or Bum deserves clearly to be rehabilitated to its real value and is a good Lee Hazlewood record. Eveything we come to like about him is present here. His deep voice from out of grave, his lush arrangements between pop and country. The only things missing are duos with girls. You can find duos with girls on Back On the Street Again but the production work sounds just too cheesy most of the times. It was smelling the end for the great Lee Hazlewood. He never really came back but never gave up nor sold out.