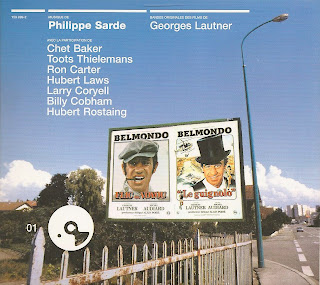 Jean-Paul Belmondo... Nobody knows him outside French boundaries but the guy used to be French most popular actor, specialized in action movies and comedies that met a huge success throughout the 70's and 80's and were largely played on French TV, especially the sunday evening. Everybody in France aged beyond their 30's grew up with that guy. The movies were not always good, even if Jean-Paul Belmondo has a few masterpieces in his huge filmography (for the details, go to his Wikipedia page: http://fr.wikipedia.org/wiki/Jean-Paul_Belmondo ). Flic Ou Voyou or Le Guignolo are definitely not among his best movies. I enjoyed them while a kid but watched them again recently and I must admit that those two action comedies didn't aged well. But the soundtracks stay absolutely relevant. Both were made by Philippe Sarde and are completely different. For Flic Ou Voyou, Philippe Sarde enroled not less than Chet Baker, Hubert Laws, Ron Carter and Billy Cobham for a jazz soundtrack. The first track, Flic Ou Voyou, is brilliant: it starts like a baroque music track then morphes into jazz. For Le Guignolo, Philippe Sarde made the choice of orchestrated music inspired by traditionnal French operetta. Both soundtracks were reedited as a double package by Universal in 2000. And it's always a huge pleasure to give away Universal music for free.