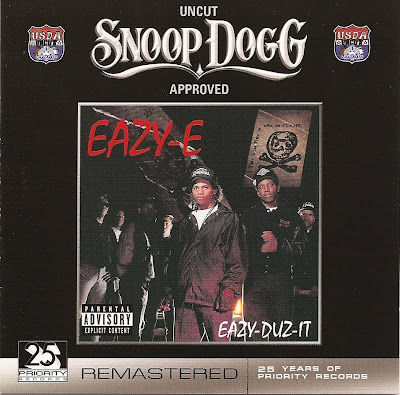 A few months ago, I entered a record shop in Paris, decided to catch up with what young people are listening to these days. I listened to Nicki Minaj and Drake but leaved the record store with Eazy-Duz-It under the arm. There are only two explanations to this phenomenon:

- Explanation 1: I'm just too old for this shit (I'm 38).
- Explanation 2: put a Drake record and an Eazy-E record side to side and you'll understand what popular hip hop is probably missing today.

I'm not talking of underground vs mainstream: west coast gangsta rap was made to be sold and make a lot of money. It's just that a while ago, hip hop was that raw shit that made you parents suit the record store that sold you the CD and it should have just staid that way. Eazy-E was a former street hodlum turned rapper. That guy barely could rap, the production was raw and minimalist, his lyrics and his lifestyle were irresponsible but he had that I don't give a fuck attitude that he shared only with the best rockers. That makes all the difference and didn't prevent him from making millions out of it.