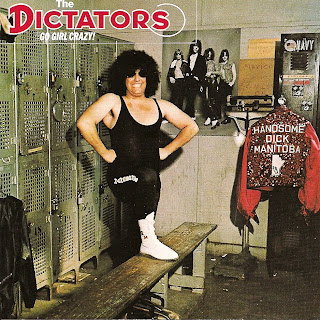 I recently posted about New York funk (Auguste Darnell), New York punk funk (Liquid Liquid) so let's post this time about New York punk. I don't mean The Ramones or The Dead Boys, not even Blondie or Television, but a band among the originators of punk rock, The Dictators. Born in The Bronx and lead by Richard Blum (aka Handsome Dick Manitoba), members Ross "The Boss" Funicello, Scott "Top ten" Kempner, Adny Shernoff and Stu Boy King had a taste for 60's pop song covers (I Got You Babe, California Sun) and loud hard rock with a I don't give a fuck funny attitude. Those guys knew that all this rock'n'roll CBGB circus was just a joke and behaved accordingly. They never got the recognition they deserved and vanished in obscurity after 3 LP's. Their first one, Go Girl Crazy! is their best and they definitely have a first class seat in New York rock posterity.